I really enjoyed Southwest Ohio GiveCamp this year. There are lots of community events where I learn stuff and have fun, but it's especially nice when we can also look back on something good done for a good cause.

I was on a small team that redid URS Dayton's website into a WordPress site. (The new version isn't online yet, so don't go clicking today and saying, "Ew, you're proud of that?") I'll say this for WordPress: despite having no genuinely experienced WordPress users on the team, we made a very presentable site in just an evening and a day. There was even enough time left last night for me to jump into another project for an hour - and being able to contribute a little bit within an hour of jumping into an unknown project says something about just how easy GitHub makes collaboration.

It's interesting: nothing stops any of us from volunteering for any of those nonprofits anytime, but something about gathering for an intense push generates enthusiasm and momentum in a way that scattered efforts rarely do. I guess that's why conference sprints exist, too. This being Sunday, it occurs to me that most churches have pitiable websites; I wonder if churchgoing geeks could do a gathering to fix some of those up. Call it a "Sprint to Emmaus" or something.

Anyway, the broadening is nice and all, but someday I'd like to be on a Pythonista team at GiveCamp. I think it would need to be preceded by an effort to convince a requesting nonprofit to ask for a Python-based project. Nonprofits always come to SWOGC requesting a specific technology, almost always something from the PHP or Microsoft universes, simply because that's what they know about. Hmm, I wonder if it would be unethical to say, "For your project, we've used a special cutting-edge version of WordPress called 'Django'..."

A great weekend. Thanks to Andrew Douglas, my team leader, and to the GiveCamp organizers!

for women and their friends

The Columbus Python Workshop for women and their friends is a free hands-on introduction to computer programming that's fun, accessible, and practical even to those who've never programmed at all before. We empower women of all ages and backgrounds to learn programming in a beginner-friendly environment.

Thanks to Pillar Technologies for hosting the workshop in their brand-new office in Columbus' Short North!

The workshop is the latest in a series based on the famous Boston Python Workshop; they've already introduced hundreds of beginners to programming in Boston, Indianapolis, Portland, Chicago, and Kansas City. Now it's Ohio's turn, so spread the word!

Traditionally, Ada Lovelace Day is celebrated by highlighting the achievements of present and past women in science and technology. Today, instead, I'm saluting the contributors of the future!

Posted by Unknown at 6:29 AM No comments: 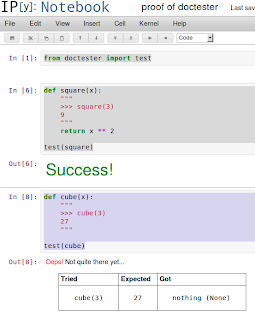 Next step - maybe - would be to finish with a scorecard cell summarizing the student's overall progress.

And then... automatically push data on a student's progress up to a webserver on the instructor's machine? Which presents a dashboard showing her where everybody is and what everybody is struggling with...

This dip into IPython Notebook reminds me of people who suggested years ago that I should integrate SQLPython into IPy. Indeed, writing a SQL-handling extension for IPy sounds really attractive... I wonder how many insomniac nights it would take...

There's no such function as doctest.testfunc. Or doctest.testclass, or, for that matter, doctest.testobj. However, you can run the doctests on a single function or class with doctest.run_docstring_examples, like so: "That's OK", I thought, "My function doesn't call any globals, so I'll just pass in an empty dictionary." Wrong. run_doctstring_examples actually needs your globals to find the object you're testing; you'll get The docs say the function is "rarely useful", but I'm finding it very useful for an IPython Notebook-based interactive tutorial I'm hoping to work up shortly!
Posted by Unknown at 1:14 AM No comments: