I often need to download documentation for offline use. Online docs typically come as a finely branched tree of separate .html files; sometimes a one-page or PDF version is also available, but those aren't as convenient to use.

I'd gotten sick of using "File/Save As..." from my browser again and again, but Firefox shortcuts like DownThemAll flattened the directory structure, broke the internal links, and didn't crawl them to get sub-pages.

The answer, of course, was in my /usr/bin all along: wget.

pulls down the everything beneath the index page, and it turns out perfectly, with a single command!

--convert-links adjusts all the internal hyperlinks so they'll work perfectly in your downloaded version.

Without --no-parent, wget would find the link to "Home" and download everything under that.

--page-requisites makes sure you get the images, stylesheets, etc. for your pages to work properly.

Now bookmark the downloaded top page in firefox, give the bookmark a keyword, and voila! Now just typing your keyword into the Firefox URL bar gets you to your perfect offline mirror.
Posted by Unknown at 4:45 AM 3 comments:

I got my xkcd regex skirt as a birthday present (funny what subtle hints like "this is exactly what I want for my birthday please please please" will do), so I thought I'd give a review. An hReview-microformatted review, of course. 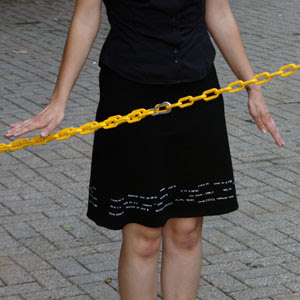 We've all got a drawer full of geeky T-shirts. But what about a geeky skirt? Thanks to XKCD, it finally exists!

The text is regular expressions syntax reminders, oriented upside down so you can read it while you sit. Simple stuff, like:

The font is large, comfortable to read while sitting. I wish the lines weren't double-spaced - I think 1.5 spacing would make the text look more like a trendy decorative hem accent.

The sizes run big. I wear 10's or 12's, ordered the medium, and it is more than big enough, even without the stretchiness. It's a soft, stretchy fabric, stretchy enough to do Rockettes high-kicks if that's what you do (but programming pays better).

The hem falls a bit above the knee, but not at all "you are not leaving the house like that young lady" high.

I'm a little disappointed in the craftsmanship, to tell the truth, for the $35. It kind of looks like a skirt made by T-shirt makers - it's two simple trapezoidal panels sewn together. The text leaves a fairly broad gap at each edge of the panels, making it really obvious where the side seams are. (I guess that could be considered a fashion choice, but I prefer hiding the seams.) The print is that slightly raised plasticky print, and I have zero confidence in its longevity. I will obviously not only have to launder it gently as advised, but also refrain from wearing it every single day. Save it for geeky occasions where it will be properly appreciated.

This hReview brought to you by the hReview Creator.

taking FOSS to the people

It's all very well to invite newbies to come to your Linux group, but you're not going to get really new people that way. Coming to a meeting or an Installfest is a commitment that demands strong, specific curiosity at the very least. Chances are, if someone knows enough about Linux to know that they want to know Linux, they're going to learn it, helpful usergroup or not. That's especially true now that the entry barrier is so low with super-easy distributions like Ubuntu. But what about those who don't know what they're missing?

That's why some of us from Dayton Linux User Group are considering renting a booth at the Montgomery County Fair. We can set up several computers and let people touch, try, and see just how easy it is - people who had never even heard of Linux or open-source, people who had no idea there was a choice, who thought that Microsoft was just how computers run. Step right up, folks. Surf a webpage, write a document, edit a spreadsheet. It's real, and it doesn't bite.

"Do you know that Tux loves you, and has a wonderful plan for your computer?"

(WOW, if only I had cartooning talent, I would make THE BEST mockup of a lowbrow evangelical tract there has ever been.)

(Wait a minute. Since when did that require cartooning talent?)

(Incidentally, I really am a hardcore Christian. Seriously. Maybe that's why this sort of thing appeals to me so much. "Freely you have received, freely give"; Jesus wrote the GPL!)

The only thing that may stop us is the booth fee: $270. It's reasonable, all things considered, but it's still a sizable hat to pass around for a small group.

Anyway, whether we get this together in time for the fair or not, I'd love to get other ideas for where to take a show like this. The fair is perfect because it has a whole lot of people milling around looking for something interesting. Where else?
Posted by Unknown at 12:55 PM 4 comments: