The first Columbus Python Workshop for women and their friends was a success!

We had about 18 students from all sorts of backgrounds, plus TAs Alyssa and Ryan from the Central Ohio Python User Group. They dived in with a will and learned an amazing amount in a short time. We all had fun and I loved having them there... there's something uniquely wonderful about teaching to faces that are smiling at you. By the end, we had several nice variants on the Color Wall. 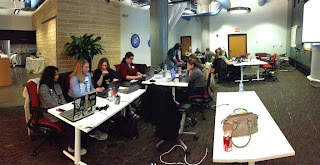 Food sponsorship by LeadingEdje kept us all nicely fed and caffeinated, and Pillar provided The Forge, its new creative workspace in the Short North.

Over lunch on Saturday, COHPy members Ann Elliot and Thomas Winningham stopped in to show samples of some of the seriously fun things our Python programmers can look forward to as their skills increase. Ann showed some awesome astronomical charts she'd made with PyEphem, and Thomas used Python and an Arduino to make a string of multicolor LEDs do tricks. (With a little forethought, we could have married up the students' ColorWall scripts to Thomas's lights... maybe next time!)

For a first follow-up, some of us worked together at GirlDevelopIt Columbus's Hack Night: 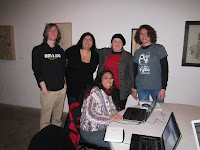 ... and we're expecting to see a bunch more at the next Central Ohio Python User Group meeting on Monday.

My experiment with running the exercises through IPython Doctester rather than CodingBat was... partially successful. Many students had to fall back on CodingBat thanks to trouble installing pyzmq on Windows. So I know some improvements to make for next time around.

To get involved with our next workshop in Columbus, sign up for the Central Ohio Python User Group. The next Ohio workshop, though, will be in Dayton... home sweet home at last!

If you came to the workshop, I would love for you to stay in touch, to ask questions or for any other reason. Thanks to all the students, the sponsors, and to the Boston Python Workshop for leading the way!